There is not a single person I know who is more competitive than I am. Basketball, softball, fantasy football, picking winners in Saturday night UFC fights, whatever. You name it, I compete. One of my worst vices is that in the heat of competition is everything locks down—compassion, respect, fear of injury, everything. It’s a classic case of Dr. Jekyll and Mr. Hyde. 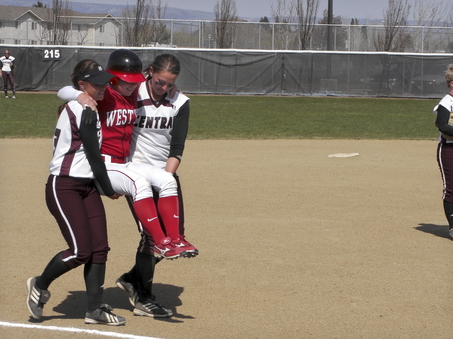 Central Washington softball players Liz Wallace (left) and Mallory Holtman carry Western Oregon’s Sara Tucholsky around the bases after she blew out her knee after hitting a home run Saturday in Ellensburg, Wash.

That’s why it is so amazing to me when a person embroiled in competition so clearly shows Christ to the world.

Last weekend at a college softball game in Ellensburg, Wash., a senior player named Sara Tucholsky hit a home run, but she missed a base in her jubilation at circling the bases. When she went back to touch a bag, she awkwardly hit the corner of the base, tore the anterior cruciate ligament in her knee and fell to the ground. If her coach or any teammate had assisted her, she would have been called out and forfeited her home run.

Here is the kicker, the first baseman named Mallory Holtman—FOR THE OPPOSING TEAM—grabbed a teammate and together they carrried their opponent around the bases, pausing long enough at each base for the injured baserunner to touch each bag with her foot. After she touched home plate, they took their competitor into her dugout to get the medical attention she needed.There is no rule against the other team helping an opposing player out in this way, so the run counted.

It made me think of the story of the four friends bringing their paralytic buddy to Jesus, without the mat and the hole in the roof and well, Jesus.

You can read the whole story HERE and tell me what you think about it. Amazing story. What if politics, business, sports and everyone operated in this manner? What a cool thought.